We’ve reached the two year anniversary of the first FDA approval of a deuterated molecule (April 2017, Teva’s Astedo – a deuterated version of tetrabenazine for the treatment of Huntington’s disease). It’s interesting to have witnessed the emergence of this unique space.

Deuteration of drugs came to prominence in the 1970s, but it took 40+ years for the first such drug to reach the market.

Teva’s Astedo (Deutetrabenazine) is similar to other deuterated products in that it possesses a longer half-life compared to non-deuterated versions of the same (often already-approved) drug. Generally, deuteration alters the metabolic, toxicological and pharmacokinetic properties of a drug – though it has been reported that most drugs would not derive any benefit from deuteration.

What is a Deuterated Drug?
From an earlier post we wrote on deuterated molecules: A deuterated drug is made by replacing a drug molecule’s carbon-hydrogen bond with a carbon-deuterium bond. As deuterium and hydrogen have nearly the same physical properties, deuterium substitution is the smallest structural change that can be made to a molecule.

Why Deuteration Matters
There are a number of well-known benefits to deuteration, including:

Lower Dosing
Deuterated drugs break down at slower rates than non-deuterated versions, resulting in a longer duration in the body. This translates into lower or less frequent doses.

Reduced Toxicity
Fewer doses resulting from the longer half-life, in turn, can reduce the toxicity of the drug in the body. A 2019 article in Annals of Pharmacotherapy found that deuteration “may also redirect metabolic pathways in directions that reduce toxicities.”

Increased Stability
Fewer drug interactions can occur due to the stability of deuterated compounds in the presence of other drugs.

Deuterated versions of existing drugs can benefit from improved pharmacokinetic or toxicological properties. Because of the kinetic isotope effect (which is the change in rate of a chemical reaction when one of the atoms in the reactants is substituted with one of the isotopes), drugs that contain deuterium may have significantly lower metabolism rates. As the C-D bond is ten times stronger than the C-H bond, it is much more resistant to chemical or enzymatic cleavage and the difficulty of breaking the bond can decrease the rate of metabolism.

Lower metabolism rates give deuterated drugs a longer half-life, lengthening the timeline for elimination from the body. This reduced metabolism can extend a drug’s desired effects, diminish its undesirable effects, and allow less frequent dosing. The replacement may also lower toxicity by reducing toxic metabolite formation.

A major potential advantage of deuterated compounds is the possibility of faster, more efficient, less costly clinical trials, because of the extensive testing the non-deuterated versions have previously undergone. The main reasons compounds fail during clinical trials are lack of efficacy, poor pharmacokinetics or toxicity. With deuterated drugs, efficacy is not in question – allowing the research to focus on pharmacokinetics and toxicity

Deuterated versions of drugs might also be able to obtain FDA approval via a 505(b)(2) NDA filing, a faster, less expensive route. (Read more: API Manufacturing of Deuterated Molecules.) 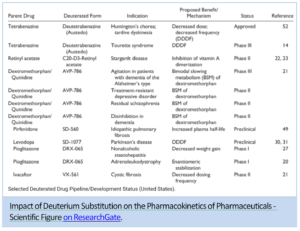 Patent Uncertainty – but Regulatory Certainty
The last decade has witnessed the rise of patents claiming deuterated versions of non-deuterated drugs.  The intellectual property aspects of deuteration, however, remain a question mark.

Patent law has been the most problematic venue for deuterated molecules, primarily with concerns over the ‘obviousness’ of the invention. While there has yet to be any resolution to this uncertainty, it hasn’t stopped pharma companies – including Big Pharma – from adding deuterated versions of a prospective compound to their patent claims.

“The total value of transactions involving deuterated drugs is close to $5 billion. While the importance of §103 ‘obviousness’ rejections remains in patent applications under current prosecution, IPR of issued patents is developing and will affect likely affect §103 interpretations in this area. However, patents are still issuing with later priority dates, and further litigation will likely occur.”

Drugdiscoverytoday.com touched on the use of deuterated molecule patents as a defensive action in a 2017 article (Drug Developers Look to Deuterated Drugs as Risk Managed Opportunity):

“Patents are expected to play a major role in this segment, largely because the majority of deuterated drugs under development are approved APIs in undeuterated form. This dynamic has given rise to a significant level of defensive IP activity, in which companies patent deuterated APIs largely on speculation that the drug will prove to be efficacious and safe at some point in the future.”

On another front, deuteration in the pharma industry has received some much-needed clarity. With the regulatory status of deuterated compounds presumably settled by the FDA (FDA Determines that Deuterated Compounds are NCEs and Different Orphan Drugs Versus Non-deuterated Versions), there has been a further upswing in interest in the space.

Deuterated Drugs: Progress & Promise
The opportunities may stretch well beyond those listed in the chart below. A January 2019 article in the Journal of Medicinal Chemistry stated that deuteration:

“might provide an opportunity when facing problems in terms of metabolism-mediated toxicity, drug interactions, and low bioactivation. The use of deuterium is even broader, offering the opportunity to lower the degree of epimerization, reduce the dose of co-administered boosters, and discover compounds where deuterium is the basis for the mechanism of action.”

So what is happening right now in the field with deuterated candidates? Here’s a chart with indications and clinical status, of products ranging from Phase 1 all the way up to Phase 3. 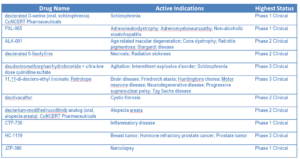