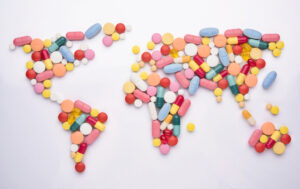 Generic drugs have moved quickly over the last 30 years into a position of dominance in drug markets around the world.

In 2018, generic drug savings totaled $293 billion in the U.S. based on 4 billion generic prescriptions (90% of all dispensed prescriptions). This yields a 10-year savings of about $2 trillion.

While some countries have historically been slower than others to embrace generics, things are changing.

A big part of the change comes courtesy of COVID, of course, which reminded us that supply chains aren’t perfect. The result among numerous governments has been an increasingly laser-like focus on moving at least some portion of the supply chain onshore to reduce supply disruption risks and (in some cases) implement price controls on specific medications.

Generic Drug Acceptance Around the World

One example is Latin America. The region bears watching, as Latin American nations continue to build research and development capabilities to produce biologics with expired patents. From the small molecule perspective, we’ve witnessed this ourselves. Over the last 12 to 18 months, Neuland has seen a noticeable upswing in interest for drug substances from a wider range of Latin American pharmaceutical companies.

Some regions (e.g., sub-Saharan Africa) continue to fight against generics skepticism. Often, cultural resistance can be traced to underlying structural issues, such as organizations undermining the credibility of generics for economic reasons, a lack of incentive to prescribe (or dispense) generics, or the absence of regulatory or health authorities to enforce product standards.

In Africa, it isn’t all bad news, by any stretch. Africa’s population boom has seen a fast-growing aging population likely to experience increased prevalence of age-related health issues:

“In addition, the growing middle class has more disposable income than earlier, leading to changing lifestyle patterns. This brings on its own set of problems. There is increased danger of heart-related diseases, high obesity rates and other lifestyle-related illnesses. In this respect, Africa is fast catching up with the West. Yet, its tropical climate makes it host to a large number of infectious diseases such as malaria, tuberculosis, polio, meningitis, cholera, yellow fever and hepatitis to name a few…Hence in the coming years there will be significant demand for generic drugs and medicines in Africa.”

It isn’t necessary, however, to travel far afield to find different approaches to generics. Europe, as a whole, is an excellent case in point:

“[T]he attitude of physicians and pharmacists towards generics still varies a lot worldwide, even between Northern and Southern European countries. In the Nordic countries trust in the quality of generics is higher than that in the Southern countries, with concerns only over their taste, packaging and appearance, since this may affect patients’ understanding and acceptance.”

Asia-Pacific has been a different tale of generics adoption. In spite of the significant structural differences in healthcare systems across the region, there is widespread use of incentives to increase the use of generic drugs to achieve cost optimization targets.

When it comes to generic medicine market penetration (see KPMG chart, right), there remains a great deal of disparity.

As mentioned above, legislation has played a major role in generics adoption in some countries. The most obvious example is the Hatch-Waxman Act, which paved the way in the U.S. for a wave of generics that now dominate 90% of the volume of the U.S. market (up from 63% in 2008), but other countries have launched similar initiatives.

What Does the Future Hold for Generics?

Some experts have pointed to a shift in dosage form as a key opportunity for generics. Oral generic drugs (e.g., capsules and tablets) remain the largest segment by far – representing a majority of the total market share. But other dosage forms are gaining ground, as economical drug delivery technologies in the injectables and topical segments improve. For example, the relatively youthful generic injectables market is projected to experience 3X growth over the next decade.

Continued margin pressures remain a restraint on the segment’s growth, as the gross margins of generic medicines have been tightening for years. The global average gross margin of generic drugs has been in a decreasing trend for years (for example, it fell from an average of 45.19% in 2011 to 43.56% in 2015). This trend is projected to continue.

The key takeaway is that medicines to treat cardiovascular disease suffer from low availability and high costs, especially in low‐ and sub‐middle‐income countries.\

The generic drug industry is driven by many stakeholders. Consumers demanding low-cost alternatives to expensive brand-name drugs are a key driver. In countries with mature generic markets, acceptance of generic medications is high. Populations in nations which lack robust healthcare and regulatory infrastructure exhibit higher degrees of distrust towards generics, though such resistance continues to decline. As supply chains become more ‘local’ around the world, robust quality assurance systems are put in place, and advocacy/education & price control/incentive programs are leveraged, generics adoption will only further increase.