How to Select a Peptide Synthesis Technique

Posted on October 1, 2017 by Saharsh Davuluri

Peptides are a complex drug class, and have historically proven challenging from a manufacturing standpoint. They are, however, experiencing a renaissance due to improvements in peptide synthesis, the development of high-throughput approaches and various innovations to overcome some of their traditional limitations, such as stability and half-life. These advances are expected to drive the peptide drug market to over $48 billion by 2025.

The decision regarding which production technique to use is driven by three pivotal factors: 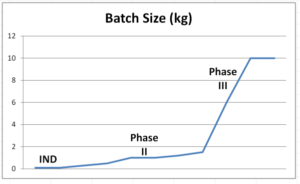 The latter two criteria go hand-in-hand: as a drug candidate progresses through development and clinical stages, the required volumes grow, as do batch sizes.

These three criteria – more than anything else – drive the peptide API synthesis strategy.

Liquid Phase: 15 and Fewer Amino Acids
While the traditional approach to building peptides – liquid-phase peptide synthesis – has largely been succeeded by solid-phase synthesis, it remains useful for large-scale production. In fact, it’s an ideal strategy for peptides containing less than 15 amino acids and when commercial requirements range from 10+ kilograms to tons.

Hybrid Synthesis: More Than 25 Amino Acids & Larger Commercial Quantities
Today, a hybrid peptide synthesis strategy is generally chosen for peptides that are greater than 25 amino acids in length, and commercial requirements range from 10 to 200 kilograms. According to a recent market report, hybrid synthesis is expected to be a key driver of growth in the peptide drug market.

One notable success from hybrid synthesis was the pioneering work on Fuzeon, an approved 36 amino acid therapeutic for HIV-1.

Liquid Phase & Hybrid Synthesis for Improved API Substance Profiles
Whenever possible, transitioning from solid phase synthesis to a hybrid – and ultimately liquid phase – methodology is recommended due to the successive improvements in purification. With each change in strategy – from solid to hybrid, and from hybrid to liquid – significant improvements in the substance profile are observed with APIs.

Peptide APIs produced with a solid phase approach contain inherent deletion- and insertion-related substances. These substances decrease progressively with the transition to hybrid or liquid phase techniques. As peptide production progresses across these 3 distinct methods, the intervening purification steps increase – leading to fewer unwanted substances in the APIs.

As an example, Neuland experienced substantive improvements when we successfully used a liquid phase segment condensation strategy for the cGMP manufacture of 35 kilograms of a decapeptide NCE.

Exceptions to the Peptide Synthesis Selection Method Rule
While amino acid chain length and the need for various bulk quantities would seem to point to one synthesis technique over another, exceptions exist. Certain complex peptides such as Linaclotide are most conveniently produced by solid phase synthesis. In the case of Linaclotide, for example, Neuland – and others – have successfully leveraged this approach using 2-chlorotrityl resin.

Leveraging New Discoveries to Improve Peptide Synthesis
At Neuland, we routinely employ all three methods for the cGMP manufacture of peptides – solid phase, a hybrid strategy and liquid phase. We’ve also developed and patented a preparative HPLC technology which yields 10-12X higher output compared to classical Prep RP-HPLC. Among the advantages of our patented process (and the reason many of our peptide customers find it appealing), our Prep RP-HPLC technique results in reduced purification & post purification cycle times.