TIDES TV: The Past, Present & Future of Peptides

Peptides – From Insulin to Fuzeon

It’s worth remembering that some of our earliest drugs – think insulin – were peptide-based. After that, there was a prolonged silence from a seemingly capable class with loads of potential.

A number of significant advances occurred in those years, including:

We’ve mentioned Fuzeon before, and it’s importance to the commercialization of peptide drugs should not be underestimated. The efforts by Roche and Trimeris to bring Fuzeon to market shifted the peptide industry, leading to the establishment of low-cost suppliers for the key starting materials.

From Chemical & Engineering News: “That…makes Fuzeon one of a few peptide drugs to have been made in near-ton annual quantities. And beyond sheer volume…it proved large-scale production of a long peptide is possible. Fuzeon production broke ground in terms of equipment and process design.”

Dr. Anwer highlighted some of the key challenges with peptides – namely, cost and accessibility.

The industry needs more consistent quality, and better supplier reliability. The performance in the supply chain must improve to keep pace with developments in chemistry.

Cost, in spite of the advances made since the introduction of Fuzeon, remains a significant barrier for peptide-based therapeutics. Consider that generally, purification costs account for more than 20% of a Peptide API’s costs.

When it comes to producing hundreds of kilograms of 20 to 30 AA-peptides, improvements in purification yield and output are urgently needed to meet these challenges.

On the quality front, a concerted API quality improvement campaign should start with:

From a manufacturing perspective, moving away from traditional Bac- chemistry would mark a major paradigm shift. Most manufacturers would then be discussing a 100-kilogram peptide order as if it was a small molecule API.

All told, there are a range of improvements that will drive the peptide market, from improvements with key starting materials to improvements in the coupling and purifications stages, and better post-purification as well.

As mentioned earlier, peptide purification accounts for more than 20% of the cost of a Peptide API. This has always been a key hurdle to overcome with peptides, and differentiation in the market among manufacturers will likely focus on a combination of expertise and novel techniques.

Dr. Anwer points out that Neuland is a leader in peptide technologies and capabilities. While the Company’s considerable experience with peptides is comprehensive, there are a number of particular contributions Neuland has made to the field of peptide manufacturing. Two of these are the wide use of precipitation to improve starting purities, and the use of SSP-RP-HPLC to dramatically increase final yields. 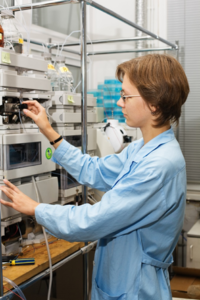 While many peptide manufacturers use precipitation, Neuland’s use of it as a primary step provides an effective way of ‘polishing up’ the starting materials – removing impurities that limit the loading capacity of the column in subsequent purification steps.

Neuland has developed and patented a preparative HPLC Technology that has 5X to 20X more purification output than the standard reversed phase preparative HPLC. This technique utilizes hydrophobic quaternary ammonium salts as additional/surrogate stationary phases. (You can read more about Neuland’s patented peptide chromatography purification technique in this post).

Neuland has also built a range of difficult- or costly-to-produce study resources and starting materials. These include derivatized lyine, DD, hybrid DDE derivatives and pseudoprolines. Neuland is considered a global root source for about 34 pseudoprolines.

On the manufacturing side, Neuland is a leader in liquid phase peptide synthesis. Among our projects, we have produced 35 kgs. of a decapeptide by liquid phase (using a 24-step synthesis process, and are currently producing 100 kgs. per year of a 15-amico acid peptide (a 40-step liquid phase synthesis process). We also have several 30-amino acid projects using standard solid phase as well as hybrid technologies.

From Acute to Chronic: Strong Outlook for Peptides

In the early days, peptides were primarily used for acute indications, such as the use of oxytocin during childbirth. With chronic indications such as diabetes and oncology, peptides are needed in larger quantities. This need is expected to continue growing due to the wide range of therapeutic indications for which peptides have potential. The reason? The natural amino acids used to construct peptides. These amino acids do not have the toxicological or genetic impacts that can arise from synthetic molecules.

Dr. Anwer’s prediction?
The peptide industry will evolve to meet the challenges discussed above. In 10-15 years as many as 50% of all drugs could be peptide-based.