Medicine & Science: Keeping Up with the Pace of Change 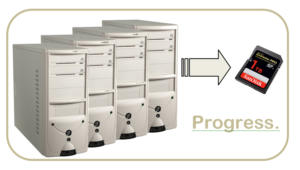 The changes we’ve witnessed in the fields of science and medicine over the last decade or two have been truly astonishing. When we stood at the beginning of the ‘omics revolution two short decades ago – long before the advent of Big Data or precision medicine – protease inhibitors and plasma TVs were just launching. It would have been nearly impossible to see what lay down the road 20- or even a scant 10 years ago.

Shrinking Planet, Increasing Opportunity
The typical business desktop computer in 1997 had significantly less computing power and storage space than an entry-level phone does today. And all of those technologies involved in developing a drug – chromatography, mass spec, imaging, data collection and analysis, and much more – have seen equal or even greater shifts.

Even within Neuland’s microcosm of the scientific world – advanced drug chemistry, peptides, contract pharma and APIs – the world has undergone massive shifts. Outsourcing, once an obscure option, has become the standard business model for research and drug manufacturing – thanks to rapid (and far-reaching) globalization. Supply chains have grown far more convoluted and complex, thanks to more efficient & faster manufacturing coupled with better infrastructure.

APIs have also grown increasingly complex, with techniques unimaginable a handful of years ago now considered standard practice. Issues such as drug solubility, drug delivery, and the ability to process potent, very-low-volume compounds are seeing barriers drop rapidly (while new ones undoubtedly emerge).

Underlying all of this change has been technology. We’ve experienced this change as we do all changes: incrementally, and not as a single breakthrough. When taken in historical context, however, the two decade long change has been astounding in its breadth.

Drug APIs – More Complex, But Simpler to Make?
It’s hard to fathom what technology will look like or be capable of 20 years from now. What we know is that technology has allowed us to develop drugs that are far more complex than anything seen before. At the same time, however, technology has simplified things enormously.

That’s the key – we are able to perform much more complex tasks with greater simplicity and less effort or expense. Thus, tomorrow’s drug chemistry might very well make our current efforts look like the discovery of germs, or hygiene. These technology advances will have enabled medicine and science advances, further pushing out the boundaries of our knowledge.

Science constantly amazes me, so it is likely that the future of medicine – while perhaps somewhat unknowable – will certainly change how we look at treating human health issues in another decade or two.

What has amazed you the most about science advances in the latest 10 or 20 years? Join the conversation on Facebook, Twitter or LinkedIn using the hashtag #AmazingScience.