Rare (or orphan) diseases may sound like a small, low-prevalence problem – hence their labeling as ‘rare.’ But with 7,000+ rare diseases having already been identified, affecting more than 50 million people in the U.S. and Europe alone, the overall scope of the problem is anything but small.  And the number of known conditions continues to grow.

A few months ago, I wrote a post referencing the Orphan Drug Act and how it incentivized rare drug research.  What are the incentives? 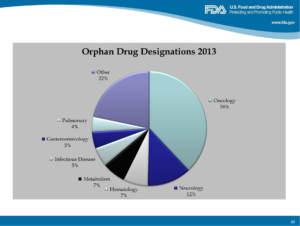 According to an FDA presentation:

If designated, orphan drugs are eligible for the following financial incentives:

In that earlier post, I discussed how little difference there is – for an API supplier and contract manufacturer – between orphan and non-orphan drug projects. (To summarize – there is very little daylight between them, save for the often-smaller manufacturing scales found with orphan drugs).

Neuland has a number of clients who focus in the rare disease space (though it isn’t one single space, but rather a wide range of indications – as mentioned above).

From a drug manufacturing standpoint, there are advantages to working with lower volume products. Reaction volumes – and the volumes of reagents & chemicals – are smaller, avoiding the challenges of linearity during scale-up of reactions.

Timelines can also be condensed to some degree, since such projects are easier to slot into production in sub-commercial scale (e.g., pilot or kilo) cGMP facilities.

One of the key differences distinguishing rare drug manufacturing from the wider drug industry is lifecycle management – or rather, the lack thereof. Because the number of batches is smaller and the volumes are lower, many aspects of drug lifecycle management either are not feasible or are far less important. As I mentioned above, this can have certain benefits – lower volumes of chemical effluent, reagents, etc. – which provide some flexibility in production.

Streamlining Manufacturing to Reduce COGS
Drugs are expensive to develop, and those costs can be elevated when dealing with very small patient populations.

With orphan drugs, the focus shifts to maximizing efficiency up front. Enhanced route scouting and other techniques are leveraged to reduce the cost of goods (COGS). Unlike typical drugs which progress through numerous stages of development and lifecycle, the focus on reducing COGS starts at the earliest stages of development and remains a core focus throughout manufacturing.

FDA guidance has addressed this issue, as well:

It’s true of any drug product: the earlier in development that process optimization occurs (reducing later-stage changes), the fewer follow-on studies will be needed – thus speeding time to market. With the higher cost pressures on orphan drugs (only partially offset by the market & exclusivity benefits of pursuing rare disease therapeutics), this takes on even greater importance.

Developing cost control measures during process development is a particular expertise of ours at Neuland, specifically enhanced route scouting & optimization. We’ve applied it towards orphan projects in a number of specialties, including neurological, cardiovascular and respiratory indications.