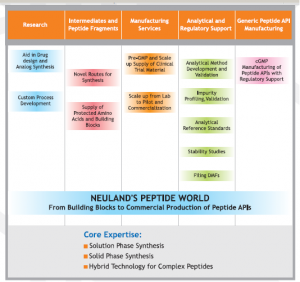 Earlier this month, I wrote a post about the growth of interest in peptide therapeutics. I wanted to expand on that a bit and share three common Fmoc strategies we employ at Neuland to disrupt peptide aggregation.

Peptide Aggregation
The aggregation of peptide chains caused by intramolecular hydrogen bonds is a common challenge with longer or more complex peptides. It can result in slower and incomplete coupling reactions and incomplete deprotection of the Na-amino protecting group – meaning a modified or damaged peptide.

There are a number of steps taken to prevent aggregation during peptide synthesis, including cleavage and deprotection. The most commonly used – and mildest – method is Fmoc – the removal of the Fmoc group to expose the α-amino group. In addition to cleaving under very mild conditions, it is (typically, though not always) stable under acidic conditions as well.

Fmoc & Orthogonal Approaches to Peptide Synthesis
One of Fmoc’s greatest advantages is its ability to work well with other protecting groups (e.g., Boc) – allowing for an orthogonal approach – a common strategy in organic peptide synthesis.

Common Fmoc Methods for Disrupting Peptide Aggregation
Advances in peptide synthesis methods and ready availability of reagents that disrupt intramolecular hydrogen bonds have made complex syntheses much more practical. There are three Fmoc strategies for disrupting aggregation. The decision to use each one is directly dependent on the type of building block being used.

Neuland Labs and Peptides
Some background on Neuland’s experience with peptides: we are both a solution- and solid-phase manufacturer of therapeutic peptides, from research quantities through commercial multi-kilo quantities. We work with clients on projects ranging from drug design and analog synthesis to route selection, regulatory & analytical support and bulk supply. We’ve also developed a preparative HPLC technique that delivers 10-20X throughput over standard preparative HPLC techniques.