Posted on February 10, 2018 by Saharsh Davuluri

Since generic drugs are – on average – 20 to 90% cheaper than innovator drugs (or NCEs), the market for generics has grown considerably in recent years as a means of reducing healthcare costs.

Differences Between NCE and Generic Drug Development
What are the differences between the design of New Chemical Entities (NCEs) and generic drugs, and what do they mean for process development & manufacturing?

For either purely generic or purely NCE companies looking to begin development or commercialize a product in the other discipline, the question is more common than you might think. Companies tend to be narrowly focused on their particular area of expertise (either generic or innovator). It is natural that they would have questions and concerns about commercialization practices outside of their typical operational focus.

Since Neuland works extensively in both areas of drug development & commercialization, these are questions we are quite comfortable answering.

The core difference between these two drug projects can be summed up in the names of their respective FDA filings: NDAs and ANDAs. 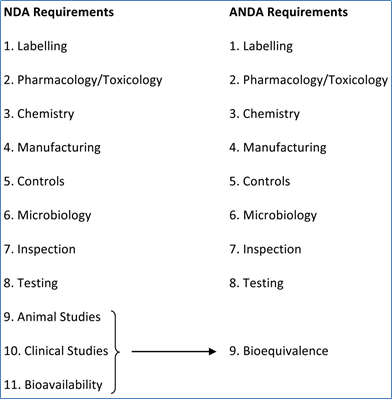 The NCE Project Approach
As mentioned above, drugs based on new chemical entities require an NDA filing with the FDA.

With NCE molecules, target product profile identification is critical. During initial project stages, the focus will largely be on the process development of the drug candidate – the key intermediate and target lead optimization steps.

Attention is also placed on process development leading to Phase I, in order to enable adequate supplies of the drug candidate. This focus will shift later to final process development (based on knowledge acquired concerning impurity formation), long-term toxicology, carcinogenicity and Phase II clinical supply.

A common approach with NCEs is to de-emphasize impurity identification during initial phase development and focus on production consistency – and then later concentrate on impurity formation (as well as impurity types), as well as developing effective control strategies.

For Phase III supply, contract manufacturers focus on registration batches and stability studies suitable for use in defining commercial retest dates. The final stage of NCE commercialization is the production of validation batches and launch supplies.

The Generic Project Approach
Generic drug applications are called “abbreviated” in the U.S. because they are not required to include preclinical (animal) and clinical (human) data to establish safety and effectiveness. Instead, a generic applicant must scientifically demonstrate that the product is bioequivalent (i.e., performs in the same manner as the original drug):

“Overall, both EU and US legislation for the authorisation of generic medicines allow for abbreviated applications to be made in the case of generic medicines. In both jurisdictions, pre-clinical and clinical studies do not have to be performed by the generic medicine applicant, but bioequivalence to the originator or “reference” medicine must be demonstrated.

Once approved, an applicant may manufacture and market the generic drug product to provide a safe, effective, low-cost alternative to the public.

Varying regulatory requirements around the world can present challenges for the commercialization of generics. These differences in standards can make it quite challenging for companies to develop a single drug which is simultaneously submitted in all the countries for approval. Because of this, regulatory strategies for generic product development are established between the contract manufacturer and sponsor before work commences in order to avoid any major surprises after submission of the application.

Maximizing Success in Generics & NCEs
The differences in process development methodology between NCEs and generics mentioned above can have a large impact on drug price, safety and performance. With generics, manufacturing costs are often decisive while safety & performance have been previously established.

With innovator drugs, on the other hand, safety and performance for an unproven molecule are paramount. Because of these differences in their characteristics, it is critical to adopt a modified approach based on whether the drug molecule is considered ‘innovator’ or ‘bioequivalent.’