Reflections on the CPhI Barcelona Show 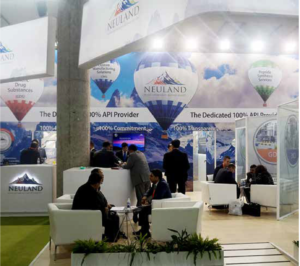 The 2016 Barcelona CPhI show (CPhI Worldwide) was an excellent opportunity for Neuland to set in place some strengthened internal sales team processes. These processes allowed us to better capture and understand the concerns, issues and challenges of both our customers and attendees in general. A bit more about what seems to be on everyone’s mind in the industry a little later…

But first, back to Barcelona. It’s a remarkable city – cosmopolitan and modern, yet bursting with history. It served as an excellent backdrop for the conference. Barcelona has historically been a key trading connection between Europe, Africa and the East – so it was the perfect venue to discuss the increasingly global pharma API industry.

Neuland held nearly 150 meetings over the course of the three-day show – keeping the booth’s 5 meeting rooms in constant use. 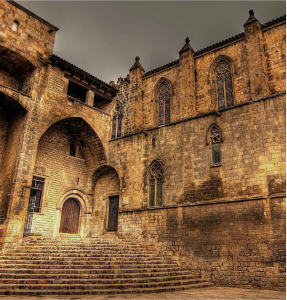 Pradeep Jain, Neuland’s Head of Manufacturing Operations, was one of the team who also had the opportunity to attend technical seminars and other exhibitions to gain knowledge about the latest advances in containment systems, and clean room & micronization technologies. (Pradeep’s personal show highlight actually happened away from the conference: visiting the stadium of FC Barcelona – a mecca for football – where diehard fans purchase samples of the stadium’s grass field.)

Neuland held its VIP event at the History Museum in the medieval quarter of Barcelona. In our internal Company newsletter – Neuworld – Pradeep Jain described the setting:

The museum event organized by Neuland was held in the Casa Padellàs – a 15th century Gothic palace that in 1931 was transported stone by stone from its original location on the Carrer dels Mercaders to the Plaça del Rei. The palace has a typical Catalan Gothic architecture, with a small inner courtyard and external staircase. During the excavation work necessary to build the new foundations for the palace, remains of the old Roman city were uncovered. To better preserve these remains it was decided to move Barcelona’s city museum to this site, which opened in 1973. 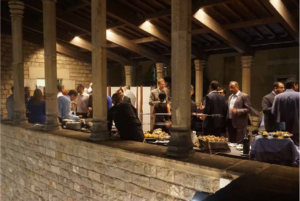 What Were Attendees at CPhI Talking About?

Many of the questions we encounter as an API manufacturer were fairly conventional, and recur at every show. Among them:

Aside from these customary questions, regulatory and supply chain queries seemed to grow as topics of discussion at this year’s show. These are two issues to which we happen to have an unrelenting commitment (and we’ve written about them frequently).

It’s fair to say that both of these issues are on everyone’s mind. There is a perception that the global economy is threatened by the possible rise of trade barriers. Combined with recent FDA guidance on Quality Agreements referencing the legal responsibilities of suppliers & pharma companies regarding cGMP manufacturing, both regulatory & supply chain issues should be expected to be a principal concern. (And truly, when hasn’t regulatory been a top issue for pharma, anyway?)

All in all, it was a successful show in a great city, and it was wonderful to catch-up with our customers and engage with those in our industry.

If you are in Philadelphia (or headed there) for the 2017 CPhI North America show, be sure to stop by the Neuland booth (#2059) and learn more about our API, Peptide and Custom Manufacturing Solutions.