Earlier this month, we published a post on Improving Quality and Yield in Solid Phase Peptide Manufacturing. In recent years, peptides have been acknowledged for their selectivity, efficacy and safety. Combined with new synthesis technologies and advances in peptide science, peptide therapeutics have become a reality – and numerous clinical trials are ongoing. 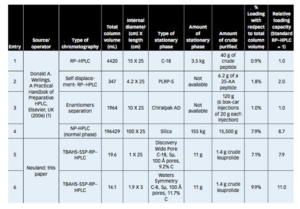 But while peptides may be safe and effective as drugs, they have never lent themselves to straightforward commercial manufacturing – especially longer-chain, complex peptides.

Reversed-phase high-performance liquid chromatography (RP-HPLC) is used throughout the pharma industry. Analytical RP-HPLC is used for the release and characterization of raw materials, intermediates, and APIs. Preparative RP-HPLC is used for the commercial production of peptide APIs and most other complex APIs not suited to crystallization.

Historically, there have been just two ways to increase the amount of sample that could be purified in a single Prep-RP-HPLC run: use a larger column (increase the stationary phase) or use displacement chromatography.

The technological advances in process HPLC instrumentation and the bonded silica supports have made possible commercial production of complex peptides such as Fuzeon, a 36-amino acid peptide, in hundreds of kilos quantities. Unfortunately, large-scale HPLC instruments and the associated column hardware are expensive. 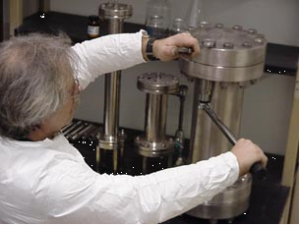 More importantly, none of these improvements have addressed the loading capacity of a given column, nor have they resulted in a significant increase in the amount of purified product (output/mL of the packed column).

In the new method described in the PharmTech article, the team used a quaternary ammonium/phosphonium salt as an additional stationary/surrogate stationary phase (SSP) – yielding to a significant increase in loadability and yield.

Any cookies that may not be particularly necessary for the website to function and is used specifically to collect user personal data via analytics, ads, other embedded contents are termed as non-necessary cookies. It is mandatory to procure user consent prior to running these cookies on your website.