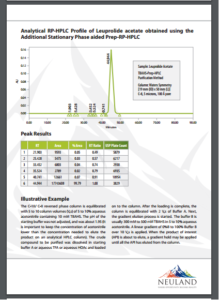 In this post, we’ll look at a unique Prep-RP-HPLC method developed at Neuland Labs to achieve 10-fold increases in sample loadability.

Despite advances in technology, there are only two ways to increase the amount of sample that can be purified by preparative reversed phase high performance liquid chromatography – or Prep-HP-LC – in a single run.

What RP-HPLC is Used For
In science labs, reversed phase high performance liquid chromatography (RP-HPLC) is used to analyze, characterize, separate, purify, and isolate small organic molecules, natural products, and biologically active molecules such as polypeptides, proteins and nucleotides. In pharma, analytical RP-HPLC is employed specifically to release and characterize raw materials, intermediates and active pharmaceutical ingredients (APIs). Likewise, preparative RP-HPLC is used to commercially produce peptide APIs, along with most other complex APIs that cannot be crystallized.

How the New RP-HPLC Method Works
The new method developed by Neuland uses C-18/C-8 derivatized silica, coated with a hydrophobic quaternary ammonium salt or quaternary phosphonium salt. It increases 7- to 12-fold the sample loading of the crude mixture of organic compounds including synthetic crude peptides. What causes such dramatic results is the additional surrogate stationary phase characteristic of the C-18/C-8 bound quaternary salt.

Preparative RP-HPLC in the elution mode is limited by the loading capacity of the analyte. In this mode, however, synthetic peptides typically have a loading capacity of 1-2 mgs per mL of packed column volume (viz., 0.1% to 0.2% with respect to total column volume). Table 1 (found on page 2 of PDF provided at web link) shows how Prep-RP-HPLC aided by a surrogate stationary phase performed compared to standard Prep-RP-HPLC using Leuprolide as an example, and tetra-n-butylammonium hydrogen sulphate (TBAHS) as ASP/SSP.

To learn more about this novel Prep-RP-HPLC method, view the complete PDF here.