Investigation of Various Impurities in Febuxostat

Posted on September 8, 2014 by Saharsh Davuluri 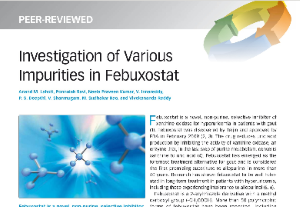 In this month’s issue of PharmTech, team members at Neuland’s R&D Center in Hyderabad published a peer-reviewed article on the analysis and management of impurities in the drug Febuxostat.

Febuxostat, a selective inhibitor of xanthine oxidase for the treatment of hyperuricemia in patients with gout, was approved by the FDA in 2009. With research showing it to be well-tolerated for the long-term treatment of hyperuricemia patients, Febsuxostat has emerged as the first promising new therapeutic for this indication in more than 40 years. The team’s Investigation of Various Impurities in Febuxostat will help in both determining more stringent specifications for the drug & its components and enabling long-term surveillance on its safety.

It’s a challenge for organic chemists to identify impurities that form in small quantities. This can be made more difficult if the product is non-pharmacopoeial, as in the case with Febuxostat. Various synthetic routes to Febuxostat, as well as polymorphic forms and impurities of the drug – have already been reported in the literature. In the PharmTech article, the identification and synthesis of various impurities that form during production of Febuxostat and its intermediates is detailed, as well as strategies to minimize the presence impurities.

We identified, synthesized and characterized fifteen impurities of Febuxostat and its intermediaries. While various Febuxostat synthesis routes have been reported, far less information on isomeric, carryover, and by-product impurities is available.

Of the 7 Febuxostat drug impurities, all but one exhibited a well-defined separation from the parent Febuxostat in the HPLC chromatogram. (One impurity required development of a separate HPLC method).

A number of strategies to reduce these impurities were presented in the paper, as well. For example, two of the isomeric impurities can be controlled via an appropriate specification for isobutyl bromide. Another can be controlled by simply switching out methanol for ethanol. Specific quality control measures or adherence to certain specifications were also proposed as control measures for some of the impurities, as were techniques such as recrystallization and alteration to reaction conditions.